Curiosity got the best of me.  Liverpool has secured Champions League football into the Group Stage for the first time since 2009-10, and only the second time in European competition in the past four years.  When it comes to Champions League, UEFA has a very simple method for putting teams into groups.  Using the mathematical coefficient (which actually is a somewhat complicated formula but publicly known), each of the 32 clubs are seeded and put into one of four pots.  The top eight-ranked teams are placed in Pot A, then next eight in Pot B, the next eight in Pot C, and the eight lowest in Pot D.  Just like in the World Cup, teams are randomly selected from each pot, and but you can’t be placed into a pot with another club from your home country.  It really is that simple.

So how does UEFA calculate the club coefficient?  That itself does require advance courses in mathematics to fully understand.   The key components are that only results in UEFA competitions can change a club’s coefficient.  Domestic results don’t count.  Using this somewhat complicated formula, each club will earn points each season.  Add that value as calculated from the previous five seasons to get the base number.  Oh yeah, then add 20% of your country’s association coefficient to the mix to get a final number.   Don’t worry about the specifics, just understand that you can go to the UEFA website and see the numbers for yourself.  Since only matches in UEFA competitions count towards the coefficient, only six teams can significantly increase their 2013-14 ranking.  Technically speaking, all countries in the Spanish, Italian and Portuguese leagues can still get a minor bump to their coefficient, but it’s still only a fraction.  Since Liverpool have been without significant European football for so long, I was worried that their coefficient had slipped to the point where they could possibly be in that Pot D with the other bottom-dwellers, thus putting them into a potential “Group of Death” scenario.  As of today, Liverpool’s coefficient is 32nd best in UEFA.  Uh-oh.

The good news is that all teams that are still involved in European competitions already have higher coefficients than Liverpool, so the Reds cannot get leapfrogged at this point.  As mentioned earlier, 33rd ranked Sporting Lisbon can technically get a small increase if Benfica beat Juventus in tomorrow’s Europa League semifinal, but it shouldn’t be enough to overtake Liverpool.  Even though there are 31 teams ranked higher than Liverpool, not every one of them will be playing in Europe next season (I’m looking at you, Manchester United fans).  Some of these teams, like 9th ranked Arsenal, may end up losing in playoff and not even qualify for the Group Stages.  But if you look at the teams ranked above Liverpool currently, I count exactly nine teams that have already been eliminated from playing in Champions League next season:  PSV Eindhoven, Rubin Kazan, Marseilles, Tottenham, Inter Milan, AC Milan, Lyon, Valencia, and Manchester United.  That puts Liverpool at the 23rd best coefficient and firmly into Pot C.  But can they sneak into Pot B?  Clearly that would make it a potentially easier pass into the knockout stage, and require more mathematics courses to understand the possible permutations and scenarios to say for certain.

The Group Stage of Champions League is comprised of 22 automatic qualifiers (like Liverpool) and ten teams that make it through the playoff.  Most of those 22 automatic qualifiers have already secured their respective required positions in the domestic league (like Liverpool).  According to my calculations, 15 clubs with coefficients higher than Liverpool have already secured automatic Group Stage play.  These clubs are, in order of current UEFA coefficient ranking:  Barcelona, Bayern Munich, Real Madrid, Chelsea, Benfica, Atletico, Schalke, Borussia Dortmund, Paris St. Germain, Juventus, Shakhtar Donetsk, FC Basel, Manchester City, Olympiacos, and Ajax Amsterdam.   Liverpool will not be able to leapfrog any of these teams in terms of UEFA ranking.

To summarize what we’ve learned at this point is that a total of 22 clubs are ranked higher than Liverpool and 15 of them have already secured passage into the Group Stage.  So in order for Liverpool to sneak into the top 16 and get into that pot of second-seeded teams, the other seven teams need to be eliminated from Group Stage, either by a late season collapse in their domestic league or through the August playoff.  Zenit St. Petersburg leads the Russian league over Lokomotiv Moscow by a single point with three games to play.  They would need to drop points.  Arsenal, Porto, and Napoli look secure to grab their respective countries’ final qualifying spot, but they would all have to lose in that final playoff.  Bayer Leverkusen sits in 4th place of the Bundesliga one point clear with two matches to play.  They would either have to drop to 5th place or hopefully lose in the Champions League playoff.  If just one of those results goes against us, then Liverpool will remain in Pot C.  In other words, prepare yourself for Pot C.

It’s still too early to speculate about potential matchups as there are still many variables at play.  But as it stands today we can expect to play in a group with a top seed of potentially Barcelona, Bayern, Real Madrid, Benfica, Atletico Madrid, or Schalke.  I know which clubs I’d like to see drawn with Liverpool.  Pot B will have some extremely beatable teams like Ajax, Basel and Olympiacos as well (wouldn’t it be nice to see Olympiacos return to Anfield on the 10-year anniversary of Stevie G’s shot heard round Merseyside?).  Or we can get the “Group of Death” scenario with Real Madrid and Juventus.  We’ll just have to wait until August 28th to find out.  Regardless of what happens, I just hope Liverpool can earn enough points in the coefficient calculation to get back into the upper echelon of European clubs… where we belong. 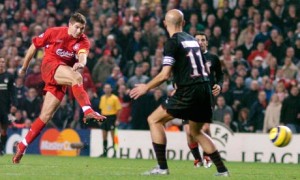 OH YOU BEAUTY!! Gerrard scores a late one against Olympiacos in December 2004. The Greeks could return to Anfield ten years later for Champions League