I would be remised if I did not start this blog with a small recap of the LFC Raleigh’s adventures in England.  What a remarkable trip!  I highly encourage you to stop by the pub for an upcoming match and make it a point to ask Darren, Mike, Colin, Sean, or Dan about their tales from across the pond.  I assure you that many laughs await. 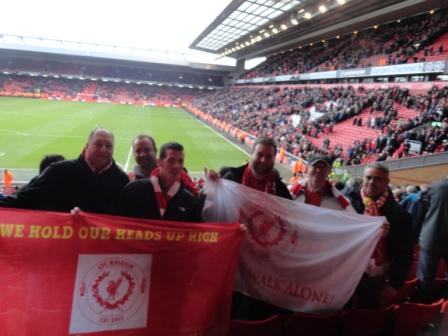 Many people helped make this trip an incredible adventure, none more so than Bernie who literally lives closer to Anfield than Charlie Adam’s penalty kick traveled in the League Cup final a few years back (has that ball even re-entered the atmosphere yet???).  Bernie set us up with tickets, arranged for lodging at the King Charles, and even went to the trouble of negotiating ticket swaps with his mates in the Kop so that the six of us could stand next to each other at the Arsenal match.  Then there’s Mick, the proprietor of the King Charles, who loved the Raleigh boys so much that he was willing to part with a signed Jamie Carragher jersey in exchange for an LFC Raleigh banner.  An easy trade, I assure you.  All can appreciate this Carra jersey as the latest addition to the walls of the London Bridge Pub on your next visit.  Special thanks to Darrell Byrne, a member of our Facebook page and chairman of the LFC Wexford (Ireland) supporters club. His last-minute efforts helped Noel McCabe secure a ticket to the Arsenal match. We need to thank Martin Skrtel, who unknowingly sent us into an intoxicating all-day blitzkrieg of Liverpool pubs with his two early strikes that essentially drove the dagger into the hearts of the Arse-nal.  Up 4-0 in the first twenty minutes is a sure-fire way to calm the nerves during a big match.  We need to thank the London city tube workers who were able to come to terms to avert the tube strike that nearly postponed the Fulham match on Wednesday.  Then there’s Mother Nature herself, who felt it was OK to send her fury all across Great Britain except for the areas where Liverpool Football Club were headed for an upcoming match.  And what about the unnamed Londoner at Craven Cottage that was able to track down a Fulham season ticket only a few hours before kickoff to ensure that all six of us got into the grounds?  I’ll thank him as well.  Lastly there’s Captain Fantastic.  Stevie Gerrard scored a textbook penalty goal in added time followed by his shirtless celebration only mere steps away from yours truly that sent the Reds to a 3-2 victory and thousands of scousers into a wild frenzy.  If you haven’t gotten the picture from these words yet, let me give you a single word:  EPIC!! 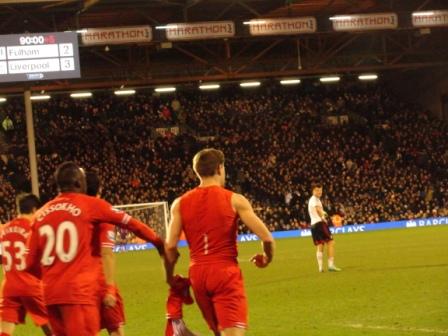 Let’s move on to more pertinent local news.  Liverpool are reportedly coming to Charlotte to play in the upcoming preseason tournament known as the Guinness International Champions Cup (can you really think of a better name sponsor that Guinness????).  Although not official, it has been reported that Liverpool and Manchester City will play in this preseason match on Saturday night August 2nd in Charlotte.  I have been in contact with many different people about this event, and sadly there is no news to report until it is “officially” announced by the tournament organizers which may happen as early as this week.  Rest assured, our compadres from LFC South Carolina and LFC Atlanta have already been in contact to try and secure the services of a local pub where Liverpool fans from all over the world (including Bernie and Mick from Liverpool who have stated their intentions to join us) can enjoy a pint before marching on to the match.  Stay tuned for details once they are finalized, but I promise you that we will have something lined up in the near future.

My final comment is about last Sunday’s FA Cup defeat at the Emirates.  Many people have been bitching about Howard Webb and how he screwed us from a deserved replay.  It’s true that he completely blew the Suarez penalty.  I am a firm believer that over the course of the season that all bad decisions will come full circle eventually.  It may sound sacrilegious, but I was really hoping that we wouldn’t score in those final 10 minutes.  Liverpool won the last two BPL matches with the same starting XI and went into the FA Cup 5th round only swapping out two field players.  We’ve got the best BPL record in 2014 and have brought ourselves within a few points of the title.  We still have two home matches against Chelsea and Manchester City on the schedule with 12 matches remaining.  We’re three points clear of Spurs for the final Champion’s League spot, and realistically four points when you consider their miserable goal difference.  If we earned that FA Cup replay at Anfield, you just know that Brendan Rodgers is going to go with a strong lineup.  Do you really want to risk another injury to Sturridge or Gerrard?  Do you really want to add to the fatigue of Coutinho or Sterling?  Do you really want to give Suarez another opportunity to bite a defender in a somewhat meaningless match?  I know that the FA Cup is a prestigious trophy and needs to be taken seriously.  But I also am smart enough to know that next year’s Champion’s League money is worth ten times what winning this year’s FA Cup would earn.  Most importantly, it may get us closer to title #19.  I know it’s a longshot, but you never know.

So get on down to the pub to watch the Reds beat up on Brendan’s old squad Swansea.  We already know that the following match against Sunderland will be postponed due to the FA Cup, so there are few chances to enjoy a pint with the lads at the pub this month.  I have a feeling March is going to be a good month for Liverpool.  As I told one of the lads about one of the many hurdles that threatened the Fulham match while in London, “I’m not worried, because shit just works out for me in the end.”  I see no reason why that won’t apply all month long.