Last week I dug my head into the numbers to determine whether or not Brendan Rodgers is the right man for the job as manager of Liverpool Football Club.  This week I wanted to take it a step further and review the progress of the club as a whole, specifically at what John Henry and the ownership group has been doing to improve their product. 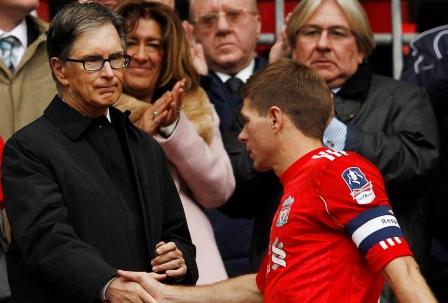 The timing for this blog couldn’t have been better, with news being released that Dutch winger Memphis Depay has decided to play for Manchester United next season.  Some Liverpool fans went ballistic at losing another transfer target, this time to the hated Mancs.  While it is true that Liverpool was interested in the talented Dutch youngster, but did anyone really think the kid was going to pass over the countryman that handed him his World Cup debut at a club that can afford to overpay wages?  Champions League or not, that kid had his ticket punched to Old Trafford a long time ago.  It’s an unfair game, this transfer market battle.  But just how unfair is it?  And is Fenway Sports Group doing enough to bridge the gap that currently exists?

The Deloitte Football Money League is a ranking of football clubs by revenue generated from football operations, produced annually by the accountancy firm Deloitte.  It is a good indication of how teams are stacked up against each other financially and the primary source of data used in the below graph.  The theory is simple:  the more money you can generate, the more money you can spend in the future to improve your product.  Going back to 2001, you can see how much of an advantage Manchester United has done compared to every other English football club.  Note that numbers for Manchester City and Tottenham were not available because neither was in the top tier of the Deloitte Football Money League until 2005.

Four important points to pick up on from this graph:

The point I am trying to make with this history lesson is simple.  Fifteen years ago, Manchester United sat alone at the top of the English Money League with a distinct advantage over everyone else.  Since that time three other teams have figured out a way to crawl up closer and surpass Liverpool in the process.  Selling the club to a Russian oligarch or wealthy sheikh are not realistic options.  Personally I would love it if they did.  Forget Financial Fair Play; I’d gladly forfeit a few years of European football if it meant getting back ahead of United with titles #19, #20 and #21.  But let’s be realistic.  FSG need to figure out a way to get back in the game.  Renovating Anfield is a good start, but will it be enough?  In order to answer that question, we need to take a closer look at the numbers.

As mentioned earlier, FSG completed the purchase of the club in October 2010.  I think it’s only fair to take a look at the direction this club is headed since their acquisition.  For the record, the numbers I have used to perform this analysis are readily available courtesy of the Guardian:  2011-12, 2012-13, and 2013-14 which were only released a few weeks ago.

Incoming revenues, defined by these reports at turnover, is essentially made up of three components: match day sales, TV income, and commercial endeavors.   The one factor that is least variable is TV income as all clubs in the Premier League consume the fruits of a plentiful masterfully-negotiated TV contract for both domestic and international broadcasting rights.  There’s not a lot of wiggle room for Liverpool to improve in that area.  Match day sales are a direct result from increasing seat capacity, specifically with luxury boxes, and that project is well underway with expected completion in time for the 2016-17 season.  What about commercial endeavors?  They’ve made some strides with Dunkin Donuts and Subway, but it’s hard to compare if they’ve done enough and can do more.  In the first full season that FSG ran the club, they reported commercial revenue of approximately £64M.  The next year that number increased 53.1% to £98M and finally another 6.1% to £104M.  It’s an improvement not to be ignored as we have surpassed Arsenal (who has reported just over £80M when you add retail, property development and player trading).

All that is great for the accountants, but are FSG doing enough for the fans?  We care most about the product on the pitch and the results that follow.  This week I’ve read a lot of people bitch that Liverpool didn’t land Depay and that we could’ve signed him if FSG were willing to splash the cash.  They try to make the same analogy that we lost Alexis Sanchez to Arsenal for the same reason.  Mostly fans are making assumptions about a side of the business that no one is privy to.  I’ve always felt that it’s not our business how anyone decides to spend their money.  When it’s our money that is collectively being spent on club merchandise, ticket sales, and official membership then we certainly have a right to ensure that the business of the club is being run properly.  There is a bigger picture then simply looking at a single transaction and saying “we need this player so let’s spend the money to get him.”  Remember Andy Carroll anyone???  The best way I think we can grade FSG in this area is to look at wage-to-turnover ratio.  Simply defined this is the percentage of incoming revenue used to pay the overall club wage bill.  How does Liverpool compare to the rest of the top clubs in England?

Over the course of the last five seasons, only Manchester City and Chelsea have spent a larger percentage of their revenues on player wages.  I’ve already discussed the significance of their ability to do so earlier in this article, and that’s not the point.  It’s a little unjustified to claim that FSG aren’t at least trying to be competitive in this area.  People also forget that they inherited tremendous amounts of debt to try and pay off, and invested significant amounts of capital to put forth an aggressive stadium expansion plan.  If you read and believe the Guardian’s David Conn’s written opinion in the 2013-14 analysis, FSG has restored financial stability.  Pretty impressive when you recall we almost fell into administration less than five years ago.  This only proves that Liverpool are spending an appropriate amount of money and not hording the profits for themselves.  They are re-investing in the club, and you can’t complain about that.  You could argue that player evaluation and their ability to recruit top talent has been weak at best, but that would be a discussion for another time.  I’d caution everyone out there to try and understand the business of big time English football before throwing out unsubstantiated blanket statements regarding the poor ownership and management seen from John Henry and Fenway Sports Group.  From a financial standpoint, I don’t know that they could be asked to do more.

My final footnote in this story deals with the Financial Fair Play (FFP) agenda instituted by UEFA recently.   In a nutshell FFP is an effort to try and ensure all clubs are operating within their financial constraints.  You can learn more about the specifics by clicking here, but the basics are simple.  Starting with the 2011-12 season, clubs only needed to prove to UEFA that they paid all of their bills.  It mattered not where that money came from, as long as it was done.  UEFA took it a step further in the 2013-14 season by forcing clubs to prove that they did not spend more than they earned.  Take a closer look at the numbers above.  Wage-to-revenue ratio for Manchester City dropped from 114% to 59% over four years yet their wage bill went up from £202M to £205M.  They reported an overall turnover of £347M last year when they beat us to the title, yet only £47M came from match day income.  Liverpool earned £51M on match day as a comparison but fell well short of City’s overall turnover, this happening in the first year that UEFA was to police that all clubs did not spend more than they earned.  Manchester City didn’t cut spending, but somehow they managed to get their earnings up to offset it.  Notice how all teams with Champions League aspirations sit in the 50-60% range now?  I’m sure if you look more closely at Chelsea’s numbers you’ll see a similar story.  Financial Fair Play, my a$$.

Three matches remain in what’s been an interesting and disappointing campaign.  I’m not done hoping the Reds can pull off a Champions League miracle.  Neither should you.  Get on down to the pub this weekend and cheer the boys on to victory!

One Response to Is FSG Doing Enough?