All Hands On Deck

Trivia question:  How many more full matches could Liverpool potentially play between now and the end of the season?  The club is still actively pursuing four cups.  OK, so the Premier League title may be out of reach, but Arsene Wenger taught me that a top four finish in the league is the same as winning a cup.  Certainly that return trip to the Champions League is worth fighting for.  Considering how this season has gone, it’s quite an accomplishment to still be alive in four competitions.  Unfortunately it also could end up being our death knell.  To date the club has played 31 matches in all competitions since the season began on August 17, a period of time that spans 153 days leading up to Saturday’s match with Aston Villa.  That’s one match every 4.94 days.  When Liverpool travel to Villa Park this coming Saturday, there will be exactly 134 days until the FA Cup final is played at Wembley Stadium on May 30, 2015.  If Liverpool were to advance to all three Cup finals and be forced into FA Cup replays in the three rounds before the semifinals, then Liverpool would play 37 more matches before the season concludes.  That’s an average of one match every 3.62 day for OVER THE NEXT FOUR MONTHS!!!  Most likely that won’t happen, but clearly things are about to get busy on Merseyside.  Are we ready?

Liverpool began the season with 25 field players on its first team.  Thirteen of those players were Liverpool regulars a year ago, eight were transferred into the club this summer, two returned from loan spells (Suso and Borini), and two were on Liverpool reserves (Rossiter and Williams).  Of the outgoing transfers, only Suarez and Agger really played regular first-team football for the club last season.  The other players from last season that saw significant playing time have been loaned out to other clubs (Luis Alberto, Iago Aspas, and Andre Wisdom).  If we saw no activity moving into this current season, then Liverpool would’ve been faced with only 17 players deemed good enough to play and compete on all fronts this season.  I want you to remember that fact the next time you hear a supporter tell you that “we should never have sold Suarez” or that “we should’ve bought one or two game-changing players instead of seven or eight mediocre ones.”  Those were simply not viable options as the team needed to seriously rebuild its depth.  But have they done enough?  Do we need to consider additional reinforcements before the end of the month?

To further illustrate the situation, I took a closer look at player availability and how Brendan Rodgers has been utilizing the squad.  From the initial 31 games player in all competitions to date, the below table shows how many games played, minutes played, and games unavailable due to a reported injury.  The percentages you see on the far right of the table indicate what percentage of games a player saw the pitch when he was healthy enough to play, followed by a similar ratio of based on the total number of minutes played.

Take Sturridge out of the mix since he’s only been available for three fixtures and it should be little surprise to anyone that Jordan Henderson leads the way with over 90% of the games and minutes available.  Only Johnson, Skrtel, Gerrard and Sterling have played in more than 80% of the available minutes.   Glen Johnson may be the aberration since his form had significantly decline prior to his injury that I doubt he’d have been called upon to play that much if he stayed healthy.

In order to get a good idea of a reasonable expectation for players and their durability over the course of a long season, I looked at last year’s statistics for Arsenal, Chelsea and Manchester City.  The below table only considers field players that have played more than five games and 40 games throughout the year.  This is their most-used players by position:

If we fail to advance in any of the remaining knockout competitions, Liverpool will play 22 more fixtures for a seasonal total of 53.  Using the Played-to-Available Ratio from the above table, we can extrapolate that Henderson (49), Gerrard (48), Sterling (48), Coutinho (45) and Skrtel (44) will still play a significant number of total games before the season concludes if we don’t advance in any competition.  Those are the only five field players that would exceed 40 games played on the year if they stay healthy.  Notice how only three players (Mertesacker, Giroud, and Ivanovic) on the whole of Arsenal, Chelsea and Manchester City were asked to play in 50 games of their 57 or 58 scheduled.  Look again to see that none of those three field players are midfielders.  Yet if Liverpool defeats Besitkas to advance in the Europa League like we all hope, then three of our midfielders (Henderson, Sterling, and Gerrard) will likely be asked to match that feat of playing in at least 50 games.  Henderson is just a physical freak of nature; there’s no other way to put it.  Sterling is young and physical, but he’s never played more than 38 games in a season.  I wonder if he’ll be at his best down the stretch when we need him to be.  Gerrard is a different delicate situation altogether.

No Liverpool footballer has played 50 games in a season since both Jamie Carragher (53) and Dirk Kuyt (51) did it in the 2009-10 campaign (Gerrard was close that same season with 49 appearances).  Carragher has played more than 50 games nine different teams in his 16 full seasons with Liverpool, while Dirk Kuyt did it twice in six seasons.  Gerrard has done it five times, the last time being in the 2007-08 season when he played in 52 of Liverpool’s 59 matches.  But the game has changed dramatically over the past seven seasons.  I was listening to a podcast from the Anfield Index earlier this week, and according to the sports science research firm Prozone they estimate that a typical midfielder in the Premiership runs approximately 30% further in today’s game then he did in 2008.  30%!  Obviously Gerrard was only 28 years old at the time as well, so can we really expect Captain Fantastic to be playing at the level needed to be competitive if the season gets extended beyond 60 games?  How will the fatigue factor into team quality at that point?

As I noted earlier, it’s quite remarkable that Liverpool are still alive in four different competitions when you consider the poor run of play from the fall.  Each carries significance and Rodgers is right to put forth the club’s best effort to win them all.  The League Cup are down to the final four clubs and if we can get past Chelsea later this month, it means another trip to Wembley to play a club (either Tottenham or Sheffield United) which we would be favorites to defeat.  Both the Europa League and FA Cup titles would require five successive victories before we would hoist their respective trophies, but the spoils of those victories are too great to ignore.  Winning the Europa League gives Liverpool a free pass to next year’s Champions League, and who doesn’t want to see Steven Gerrard hoist the FA Cup victoriously on his 35thbirthday in his last match wearing the LFC jersey?  All trophies are important at this stage. 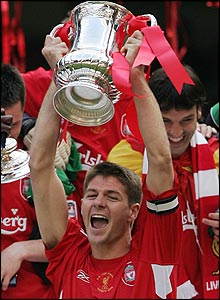 Who wouldn’t want to see this again, on his 35th birthday? (Photo courtesy of BBC Sport)

So what’s the point?  This started as an exercise to satisfy my own personal curiosity.  It ended up opening my eyes sending alarm bells ringing to my heart.  January is a popular month for speculation as the winter transfer window continues.  I’ve heard supporters complain about letting Sterling take a Jamaican vacation last week.  I’m less bothered by it now that I see how many potential critical matches Liverpool will face down the stretch.  I’d rather have him refreshed and recharged, especially when four of our next five Premier League matches are against teams we need to beat out if we are to finish in the top four (West Ham, @Everton, Tottenham, @Southampton).  I’ve heard people question team selection in the past, but now is the time for Rodgers to establish a rotation that works for everyone.  If we start to see the likes of Joe Allen, Ricky Lambert or even Dejan Lovren get the call then we need to put it into proper perspective.  Liverpool cannot succeed if we only play 14-15 players down the stretch run like we did a year ago.  Kolo Toure is away on international duty as Ivory Coast plays in the Africa Cup of Nations, and he may not be available until the first leg of the Europa League knockout stage against Besiktas on February 19th.  Speaking of that tie, Liverpool will be without the services of Lazar Markovic who was red-carded in the final Champion’s League group stage match against Basel.  As you can see, injuries aren’t the only concern for Rodgers down the stretch.  It’s time to call “All hands on deck.”

In conclusion, I think it’s important for everyone to understand the entire picture as transfer speculations continue all month long.  Personally I don’t think we need to spend money on Divock Origi to recall his loan as his presence in the squad doesn’t improve our best XI when Sturridge returns.  I won’t argue it would be nice insurance to have, but I’m not convinced he’d be a better option than Balotelli or even Borini at the moment.  I think it’s important to try and keep Lucas and Suso in the squad until the end of the season, if only because I’ve shown how congested our fixture list could potentially end up becoming and we’ll need the fresh legs.  Youthful midfielders are never a bad thing to have at your disposal.  I’d like to see the young Jordans (Rossiter and Williams) get a chance to shine with a nice mix of experience as we progress in the FA Cup.  It will help with their development and give other players one fewer match to worry about.  I won’t fret if it doesn’t happen though.  Lastly I want to remind everyone of a simple point I made earlier.  Liverpool is surprisingly still alive in four competitions.  Embrace it.  Enjoy it.  Get down to the pub and cheer on the Reds with your mates!  I know I will!