Has Rodgers Lost the Plot?

Four games into the season and Liverpool supporters around the globe have collectively hit the panic button.  Going into the season, I had blogged that the club needed a strong start to these first four games to help kick-start what appears to be a challenging fall ahead.  Results matter most, so on the surface everyone was happy with seven points out of nine in the first three matches.  Skeptics go back to all three matches and talk about the poor play and fortunate refereeing that helped disguise the victories.  The 0-0 draw at Arsenal was a clear high point for the club, with only two world-beating Cech saves keeping Liverpool from stealing all three points at the Emirates.  Just win that home game against West Ham and go into the international break near the top of the table.  Not so fast.  We all know what happens next.

To say the 3-0 loss was a disappointment is an understatement.  To say it was catastrophic is extreme.  The team is going to put in poor performances, even at Anfield.  What worries me more than anything isn’t how the team performed against West Ham, rather it’s how the manager performed when the team needed him most.  Often times in any sport, a coach/manager makes a decision that has the masses scratching their head.  This happened to me on Saturday, which had me ultimately asking myself the question, “Has Brendan Rodgers lost the plot?” 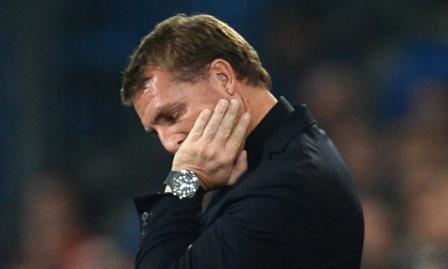 After analyzing the West Ham match followed by the multitude of loan activity as the transfer window deadline approached, that’s the first time I have allowed that question to enter my mind.  Before looking at the West Ham match, I recall the Arsenal draw.  Personally I thought it was a genius move to recall Lucas into the roster and kill off rumors of his departure to Serie A.  With a gauntlet of away fixtures all autumn long, having a strong defensive midfielder like Lucas at your disposal gives you options in those challenging environments.  His inclusion at the Emirates helped stabilize the midfield in the first half as Liverpool dominated play.  When he lost his legs early in the second half and got subbed off, Arsenal took clear control of the match and could’ve won the match.  I don’t have my coaching badges and I don’t see what is going on at Melwood, but I hardly think I was alone in thinking Rodgers would alter the starting XI before the West Ham match.  While using Lucas in the roster to solidify the middle helps defensively, it comes at the expense of a more creative attack-minded player like Jordon Ibe or Danny Ings.  What I thought to be a genius move at the Emirates would be considered an idiotic move at home against a mid-table team like West Ham.

For weeks people have been complaining about Dejan Lovren starting over Mamadou Sakho.  While I would’ve started Sakho over Lovren from the start of the season, I understand the reasons why Lovren was the guy for these first four matches.  As West Ham took the early lead, you’d be hard-pressed to convince me that Sakho would’ve prevented that first goal.  Lovren clearly was at fault with that second goal, but you can’t really say that ANYONE in that defense played well in the first half.  Everyone would’ve signed up for three clean sheets to start the season, so it’s understandable that Rodgers would want to maintain that continuity against West Ham.  I’m sure he thought it made sense to keep the same starting lineup that played so well against Arsenal, and while I disagree with that premise I certainly don’t begrudge that decision.  What bothers me more than anything else is going into the locker room down 2-0, at home against a mid-table team that is without some of its better players, and making ABSOLUTELY NO ADJUSTMENTS!!!  Through 315 minutes of football, Liverpool put two goals on the board.  The first goal was an incredible goal-of-the-month candidate from Coutinho, the second a goal that rightfully should’ve been disallowed.  If ever there was a time to deploy a new tactic in an effort to stimulate the offense, it would be at half-time when you should have the squad’s full attention in a closed locker room for 15 minutes.  Not only could you verbalize the plan to ensure there was no miscommunication with the players, but you would likely catch the opposing manager off-guard.  Slaven Bilic is a smart manager, and his game plan clearly won the battle of tactics in the first half.  There’s the old quote from Albert Einstein that the definition of insanity is doing the same thing over and over again and expecting different results.  With only 45 minutes of football left to play needing three goals to win the match (the only acceptable result at home against West Ham), we saw insanity at its core.  I ask you again, “Has Brendan Rodgers lost the plot?”

The weekend is over and I return to my regular job on Monday August 31st.  Normally it’s a day that football fans rue with constant rumors of incoming and outgoing players.  This year was different as I was confident that Liverpool was done with their transfer business.  Or were they?  Samid Yesil, the 21-year old German striker acquired from Bayer Leverkusen three years ago yet to feature for the first team, is loaned out for the season to Swiss club FC Luzern.  Tiago Ilori, the promising 22-year old Portuguese defender acquired two years ago from Sporting Lisbon for around £7 million and has never featured for the first time, sent off on loan to Aston Villa.  Lazar Markovic, the 21-year old Serbian midfielder bought a year ago from Benfica for £20 million gets inexplicably loaned out to Turkish club Fenerbahce.  This is the most perplexing move as Markovic played in 19 games for the club a year ago, scoring twice, while making a push into the Serbian national team.  On Monday Liverpool Football Club looked more like a mortgage broker shipping off value across Europe on transfer deadline day.  What is going on here?  There’s has to be a reason.  Surely the club will be depleted of talent as a result.  Let’s look at the depth of the club as we approach Europa League and Capital One Cup games.   Conventional wisdom is that the club will need about 25 players to adequately field the squad across four competitions all year.  How does Liverpool stack up with their top 25?  Let’s see:

On the surface the numbers look decent, and you could legitimately question whether or not one could find room in the top 25 for a guy like Ilori or Yesil.  Some would argue that some of these players have had their opportunity to shine for Liverpool and failed to do so.  I’m looking at you, Joe Allen.   Others point out the injury-ridden career of Jon Flanagan or the lack of real 1st team experience for guys like Brannagan, Rossiter and Teixeira.  Doesn’t leave you brimming with confidence, does you?   Clearly when the club starting acquiring talent early in the season with a plan in mind, but no one really thought about the consequences of what would happen to the existing roster?  There’s only so much room at the inn in Melwood.  It’s easy to identify players you want to bring in, but not so easy to justify shipping off players you only recently acquired.  Yet that’s exactly what appears to be happening.  So the question remains, “Has Rodgers lost the plot?”

Many people speculated that the terrible finish to last season was the death knell of Brendan Rodgers as manager for the club.  He retained his job, but certainly Rodgers has to realize that he’s on his last legs as manager.  If you believed that you were on your last-ditch effort to retain employment, wouldn’t you want to have every possible resource at your disposal?  If Rodgers fails this coming season, he is clearly out of a job.  So why would he benefit to ship off any player on loan?  It makes little sense to me.  If Lazar Markovic can help you win a tough road match at Rubin Kazan and help you advance to the Europa League, why not keep him at Melwood?  What do you care about his professional development as a player by getting more playing time in Turkey if you end up coaching some pub team in the Blue Square conference next season?  The only theory that I can come up with is that FSG mandated an internal salary cap for Rodgers.  In order to remain compliant within UEFA’s Fair Play rules, they know exactly what the wage bill needs to be and remain compliant.  When a player goes out on loan, both clubs end up sharing a portion of that player’s salary.  While Liverpool probably end up paying most of Mario Balotelli’s wages while he returns to Milan this season, it stands to reason that Fenerbahce will be paying more for Markovic’s services.  If I am correct and Rodgers needed to trim his roster like a varsity high school soccer coach, then I guess I could understand why players like Ilori and Markovic are shipped off temporarily.  Is it really worth paying their full salary for what likely will amount to less than a dozen games all year?  Maybe not.  Even though I sort of understand the excessive loan situation, it’s not as bad as you might think.  Chelsea currently have 25 players on their 1st team roster, and credit 33 players out on loan.  They have enough talent playing for other clubs that they could probably field a team in the Championship and earn promotion to next year’s Premier League.  That’s no joke.  So the fact that Liverpool has 14 players out on loan is not that worrisome to me.  Most of those players are young enough to think that Liverpool is their future.

Yet the question remains, “Has Rodgers lost the plot?”  I don’t think so.  The mass exodus of loaned players at the deadline suggest something larger is at stake.  I’m still uncertain that Rodgers may not have the respect of the players, nor does he have the tactical adaptability to conjure up a win from nowhere.  Great managers seem to figure out how to win games that their outplayed clubs had no business being in.  I’m not sure the surprising wins and successes come from Rodger’s genius as they do short moments of brilliance from some great players.  Rodgers is definitely a good manager, but can he be great?  Time will tell as Rodgers remains the bookmakers’ favorite to be the first manager sacked.  I don’t know that he has “lost the plot” as much as I am starting to believe that he is not the guy that can be successful giving the constraints laid out by FSG.  If you can’t blame Rodgers, then you must blame FSG, right?  Quite frankly there’s nothing you can do about it anyway.  It’s certainly frustrating as a fan, but there’s always the MLS.  You know what, though?  Results matter.   Beat Manchester United on September 12th and all of this will be moot.  Three points at Old Trafford and all will be right with the world again.  There will be much rejoicing.  And as we all know in this sport, anything is possible over 90 minutes.  So get on down to the pub to join your fellow Reds cheer the team onto victory!!

Posted in General Discussion, Match reports on 4 September 2015 by Ken Kendra
One Comment »

One Response to Has Rodgers Lost the Plot?