Well that certainly sucked.  I got a text from my friend this morning that simply read “I’m feeling as if someone beat my dog this morning.”  That’s a perfect analogy actually.  There is no question in my mind that the better team lost yesterday.   I don’t care what anyone says.  Call me a bitter Liverpool supporter, call me biased fan.  I don’t care.  Mourinho didn’t outcoach Rodgers.  It wasn’t brilliant tactics executed to perfection by a better group of players.  It wasn’t a deserved result for Chel$ki, nor was it a just defeat for Liverpool.  Anyone that tries to convince you otherwise is delusional.  No disrespect to Mourinho, but my grandmother could’ve came up with that game plan, playing a mix of young reserves and aged veterans that cost over $180 million in transfer fees and lucked into that victory.  And she’s DEAD!  So maybe there’s a little disrespect intended for Mourinho with that comment, but it’s true.  You can’t kick me in the balls one day and expect me to be happy about it the next day.  It’s OK to get mad when this happens.  For the first time in a long time Liverpool played one of the perceived juggernauts of English football and was the clear-cut favorite.  They were the better team and played like it.  I expected points.   Chel$ki simply got lucky.  I am not going to put lipstick on that pig of a match and try to make it better.  It was still a pig.  Mourinho didn’t outsmart anyone.  It came down to luck.  Now we have to listen to Chelsea fans gloat because they got the double over us.  I have to look at Jose Mourinho and cringe that he gets any credit for that result.  He is the BPL’s version of Bill Belichick.  God forbid they win the Champions League.  Their heads will swell so much that west Londoners will need to hop on the tube just to get some air to breathe.

Now that I have sufficiently exorcised that vitriol, I will give some props to the London club.  Fair play to Chel$ki.  They may have been forced to resort to abysmally hideous tactics with their overpaid roster, but they got the result they required.  That’s as good of a compliment that I am presently capable of giving them, so bravo.  But almost as bad as losing the match were the comments I was hearing from Liverpool supporters after the match was over:
“It was a good run”
“we couldn’t have expected to win 14 in a row”
“the goal was always to get top four anyway and we are guaranteed no worse than 3rd”

Give me a break, people!  Those are the words you hear from someone that has been defeated, someone that has given up.  NEWSFLASH:  This title race is not over.  I’m reminded of the great line from character John Blutarsky in Animal House who asked his fraternity mates “Was it over when the Germans bombed Pearl Harbor???”  As Grant Wahl pointed out after the match, those who assume any team will win out the rest of its games haven’t learned much from watching the Premier League this season.  I still believe that this script isn’t over yet.  Have you stopped believing?  Have you stopped dreaming?  Sounds like some people are readying themselves for the eventuality of Manchester City winning the title and accepting their 2nd or 3rd place consolation prize.  I think it’s time for those supporters refresh themselves on the lyrics of “You’ll Never Walk Alone.”  They are not just words to sing before the match.  They are words to live by.  And they have never been more appropriately needed then now.

When you walk through a storm, hold your head up high and don’t be afraid of the dark

This team just went through one hell of a storm.  Their world is being hit with a Category 5 hurricane and it’s our job to help them keep their heads up high.  You could see their despair after the final whistle, especially a gutted Captain Fantastic.  Any other player makes that miscue and it would’ve been devastating, possibly ending a career as a Liverpool footballer.  I’m sure that Steven Gerrard will have a few sleepless nights in his near future.  But after that infamous slip at the midfield stripe, I couldn’t have been more proud to call myself a Liverpool supporter when I heard the Kop singing his name to support their captain.  Here is a moment that could haunt the lad a long time, a defining moment of cruel and unusual punishment typically reserved for guys like Bill Buckner.  Yet there were no groans from Merseyside.  There was only the Kop calling out to remind him that they were with him, reminding him to don’t be afraid of the dark that was created from that dreadful moment.   Hold your head up high, Stevie.  We are still with you.

At the end of the storm, there’s a golden sky and the sweet, silver song of a lark

The Chel$ki match is over.  Nothing we can do about it now.  Two games remain on the schedule.   Both Crystal Palace and Newcastle have secured their place in the league for next season and neither can qualify for Europa League.  There is no reason for them to take a page out of the Mourinho 19th century playbook that he stole from Sam Allardyce.   It’s almost like an early preseason for them.  The managers are sizing up the roster to see what needs they may need to fill in the summer transfer window.  Players are fighting for their position and a paycheck next season.  There shouldn’t be a bus stop in the defensive third, so the larks of Liverpool Football Club will be able to sing that sweet silver song that we have come to love.  That “poetry in motion” which has resulted in 96 goals to date and counting.

I can still remember the moment that I dared to dream.  I was sitting in the stands of Craven Cottage wondering how it was possible that we were going to drop points to the bottom-dwellers of the Premiership.  But then Gerrard stepped up to the spot and drilled home the winner against Fulham, disrobing his jersey as he teammates rushed on to celebrate only a few feet in front of me.  At that moment I knew we could challenge for the title.  Chel$ki didn’t wake me up from that dream.  They are just the annoying landscape guy with the gas-powered leaf-blower tossing around that dream of Title #19.  We need to walk on and keep dreaming. 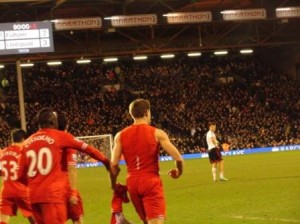 Gerrard got me to dream against Fulham. He can do it again.

Walk on, walk on.  With hope in your heart.  And you’ll never walk alone

If you need any more help at this point, then I wonder why you even made it this far in the blog.  25 years and two weeks ago, 96 Liverpool supporters lost their lives.  The youngest victim was Steven Gerrard’s 10-year old cousin.  Gerrard has played inspired football and his leadership is unparalleled.   He must feel like he’s on an island, but he’s not alone.  The other players have stated that they want to win this title for him.  You could see the looks of exasperation on Luis Suarez with every failed attempt against Chelsea.  The frustration on the players every time a Coutinho pass missed the mark.  They must feel like they’ve let their captain done.  Like they’ve let the entire city of Liverpool down.  They need to know that we still have hope in our heart.  These guys are not on an island.  They will never walk alone.  Keep making us believe, because this dream is not yet over. We Go Again against Crystal Palace on Monday.  Keep dreaming.