Just over a week from now the new Premiership campaign will begin, and I couldn’t be more excited.  I am looking forward to this particular season than any other one in recent memory.  It’s been an eventful summer for Liverpool Football Club, and there’s so much ambivalence and uncertainty that no one really knows what to expect.  Have we turned the corner and discovered what it takes to return to the elite of English football?  Or have we turned down the path of desperation which ultimately fails to achieve and keeps us mired in mediocrity?

When the new fixture list was released not long ago, many fans groaned at the difficulty that Liverpool will be faced with starting off the season.  I never get too distraught since everyone plays the same balanced set of teams over 38 games, but the manner in which this season commences is quite intriguing.  On Sunday August 9th Liverpool will return to the Britannia Stadium to face a Stoke City squad that was soundly victorious in our last game of last season.  The term “must-win” is not a favorite of mine when it comes to a match, and I can’t ever recall saying that about the first game of a 38-game season before, but my initial thought is that Brendan Rodgers had better find a way to get three points at Stoke City. 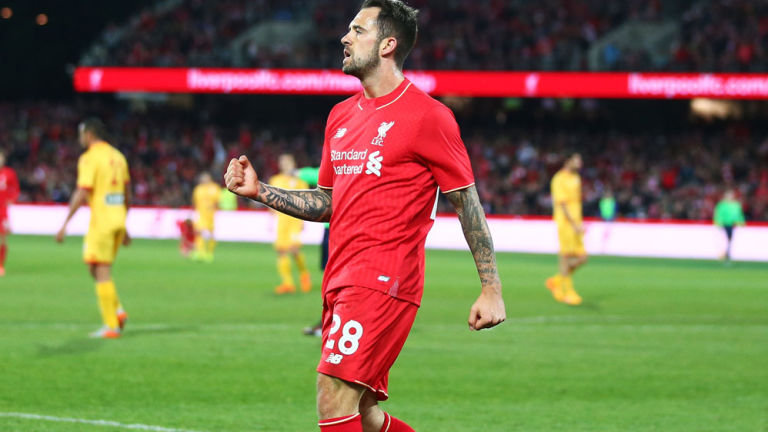 With Daniel Sturridge still out to injury, newcomer Danny Ings may be called upon in league opener at Stoke City (photo courtesy of SkySports)

Liverpool is entered into four different competitions this season, but the Premier League is the only one that has games played before the first international break at the end of August.  These four fixtures will clearly shape the direction that this club is headed:  at Stoke City, home to recently-promoted Bournemouth, away at the Arsenal, then home to West Ham United.  Look at the middle two fixtures of those four.  Logical supporters would agree that we should expect to defeat a newly-promoted team at Anfield, but not on the road to a Champions League team.  We could seriously only hope to get a result against Arsenal at the Emirates.  A common formula for success in football has been to win all matches at home, and draw on the road.  If you can manage that formidable task over 38 matches and you’ve earned 76 points, good enough for a top three finish in five of the last six BPL seasons.  To start this season with two wins and two draws gets us on track for that mark.  Beating Stoke City on August 9th puts us in great position to get ahead of that curve, before the Europa League and Capital One Cup begin to cram their matches into a tight schedule.

In theory this all sounds good, but two immediate items needed to be addressed before I convinced myself:

Let’s address these two questions with a simple comparison of last summer and this summer.  In May 2014, Liverpool came agonizingly close to winning its first Premier League title in 25 years, but the season was judged a success as we made a deep run and returned to the Champions League.  Confidence was at the highest level not seen in years.  Off-season needs had to be addressed, but some silly 6-week tournament was being played in Brazil that prevented much activity from happening early in the window.  We sold our best player with a plan to bring in new talent that would keep us in the elite of the sport.  Only Rickie Lambert signed for the club before the start of the World Cup, while others had to wait.  Adam Lallana and Emre Can signed early enough to join the club on the North American tour, but others weren’t brought in until later in the window.  Dejan Lovren and Javier Manquillo both started in the season opener on August 17th only a few weeks after inking their new deals in Liverpool.  Alberto Moreno joined the club on August 16th, started his first match for the club on August 25th.  Mario Balotelli joined on August 25th and saw the pitch for Liverpool on August 31st.  The tour was an incredible success.  Liverpool advanced to the finals of the Guinness International Champions Cup entertaining tens of thousands of North American supporters, but take a closer look at who was playing in those matches.  You’ll see names like Conor Coady, Martin Kelly, Jack Robinson, Jordon Ibe, Sebastian Coates, Oussama Assaidi and Kristoffer Peterson.  All of these players transferred out or left on loan before the window closed on August 31st.

Now let’s take a look at this current preseason.  It was a hugely disappointing finish, and no one really knew if Rodgers would keep his job, or any of his staff for that matter.  More player needs were going to get addressed while it had become apparent that our best player was forcing his way to another club, just like last summer.  However, this time around the club was able to conduct its business swiftly and firmly.  They didn’t even let some silly 4-week tournament in Chile get in their way of signing Roberto Firmino!  Six of the seven incoming transfers were inked before the preseason tour commenced, with Firmino the only newcomer not making the trip due to international commitments playing for Brazil in Copa America.  That’s just good business and you’ve got to give Ian Ayre some credit for that.   The tour was utilized to give the new talent (Nataniel Clyne, Joe Gomez, Danny Ings) time to familiarize themselves with the Brendan Rodgers plan and gel with the existing core of players (i.e Henderson, Skrtel, Lallana).  We weren’t giving our surplus-to-requirement players a showcase so that we could maximize their transfer fee.  No, players like Mario Balotelli, Fabio Borini, and Jose Enrique were left home to work on their Instagram game.  There is a core of players that have been working together for weeks with little disruption or distraction from the short-term objective of getting off to a good start.  Additional reinforcements can take their time to work their way back into the plan.  There is no need to rush Coutinho, Emre Can or Firmino in the equation just yet.  You have others that should be match-fit and can do the job.  And while it’s true that Christian Benteke’s Liverpool career will only be a few weeks old when that Stoke City match kicks off, at least he was off playing with Aston Villa in their preseason so his fitness level should be good.

Clearly we are entering this season better prepared than a year ago, with a stronger sense of urgency.  What about the great start to last season?  Southampton came to our house as the only club in the league more disheveled than us.  They had a new coach and lost four starters in the transfer window, yet we barely managed a 2-1 home victory.  Then we were expectedly dominated by Manchester City at the Etihad before going to Tottenham for an impressive road win.  Even though we had only one impressive result in the opening block of games, supporters were flying high heading into that international break.  Glen Johnson got hurt in the Man City match, but no one really was too worried about that.  Then Daniel Sturridge got hurt training for England’s upcoming fixtures.  Then Welsh international Joe Allen hurt his knee in a qualifier against Andorra.  Then Emre Can turned his ankle for the German U-21 squad in a 8-0 victory.  Adam Lallana was still coming off his knee injury from the preseason and Martin Skrtel wasn’t exactly 100% either.  These injuries amplified the fact that some players were thrust into the picture while not really having a lot of time working the system together or the benefit of a full preseason under Rodgers.  It was a recipe for disaster as we all soon discovered.  It didn’t take long for the next three results (home loss against Aston Villa, road loss at West Ham, home draw against Everton) to completely negate the great start.  There’s an old adage in golf that you can’t win the major tournament on the first day but you can certainly lose it.  That analogy works for Liverpool Football Club this season.  We can’t make the season a success after four matches, but we can certainly make it a failure.

As I assess the current roster and situation, I feel optimistic.  There are no more excuses.  The club has depth, talent, and familiarity with both the system and each other.  With a win at the Britannia on August 9th, the team can exorcise those recent demons while gaining one additional attribute that is critical for success:  confidence.   We can take those three points back to Anfield and follow it up with a win over Bournemouth.  With confidence building, the club will head south to London with a chance to make a strong statement as to the direction that Liverpool is headed this season.  No one will be expecting a result, so we’ll have nothing to lose.  Technically speaking I know that our match against Stoke City isn’t really a “must-win.” A draw wouldn’t kill us, nor really would a loss for that matter.  But for me, Liverpool have a great chance to start the season with three wins in four.  It is clearly within our grasp.  It’s an opportunity to get my eyes looking out the windshield into our future, away from the rear-view mirror crying about our past.  See you at the pub on Sunday!