Gutted.  That’s the only word that accurately describes how I feel tonight after watching the Reds march into Stamford Bridge and lose to Chelsea in the Capital One Cup semi-finals in extra time earlier today.  There’s so much to be said about tactics, player selection, our inability to finish, keepers that belong in the NBA, ankle-stomping, rental players and plastic fans.  What’s done is done.  The grieving process may take longer for some, but I am ready to move on.  It was a decent Cup run, but we need to move on.  OK then, so now what? 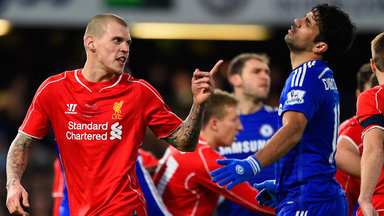 The majority of supporters understood that the 2013-14 run for the title was a fantastic dream catalyzed by an overachieving thin squad in great form playing against fatigued atypically-weak competition for the top spots in the league.  With the departure of Luis Suarez, it would be foolish to think such a similar run would be possible this season.  But with the influx of new talent acquired in the offseason, a return to the Champions League would be the barometer for success this season.  I would claim it’s a requirement and anything short of that would be viewed as a failure.

Liverpool is faced with two possible routes to enter next year’s Champions League competition:  finish in the top four of the Premiership, or win the Europa League.  Some would argue that the latter route would be a backdoor into the competition and shouldn’t be used as evidence of a good season.  I couldn’t care less, and personally it would be fantastic to see Steven Gerrard hoist another trophy before heading off on his American sabbatical.  Looking at the body of work this season, and you’d be hard-pressed to believe that on the whole Liverpool is worthy of either accomplishment.  If you look at the recent form and the inevitable return of the league’s second-leading scorer a year ago, you start to think that anything’s possible.  Does Brendan Rodgers need to focus on one competition instead of another?   Surely it would be suicidal to try and play our best XI in both competitions trying to win every match moving forward.  Or can we?

In order to formulate my own opinion, I took the time to complete a forecasting exercise.  Liverpool currently sit 8th place in the Premiership on 35 points, five points behind 4th place.  Liverpool have only 16 matches to make up those five points while hurdling over four of the seven teams currently above us on the ladder.  That sounds like a difficult task, but just how difficult will it be?  I have broken the remainder of the season into three different phases based on progression into Europa League knockout stage.  Phase I covers from the West Ham game on Saturday up until the Europa League Round of 16 fixtures scheduled to begin with first legs played on March 11.  Phase 2 will go from that point until the Europa League quarterfinals first leg on April 16.  Phase 3 covers the rest of the season.   The theory behind this is that as we progress in the Europa League, we look ahead to the next phase of fixtures to consider how to prepare for the immediate battles ahead.

The only way that Liverpool can realistically accomplish this monumental task is to defeat the teams ahead of us in the table.  Four of our next six league games are against such opponents.  These games are must-wins, none more important than the fixture on 21-February at Southampton.  Sandwiched in the middle of our Europa League knockout matches, the Saints will have ten days to prepare for this home fixture while Liverpool has only three.  Afterwards the Reds will have to then travel to Turkey to play Besiktas only three days before their next scheduled league match home against Manchester City.  Those four matches in the final ten days of February will tell us a lot about where Liverpool is headed.  Let’s assume that Liverpool will win all six of the league matches in this phase.  For the sake of this exercise, I am also making some assumptions about how the other teams will fare against other competition (i.e. winning all games against clubs not in the top eight).  We could debate individual fixture results, but I am trying to get a realistic look at what to expect through the end of February.

Expected results between 31-Jan and 3-Mar

As you can see, winning these six games only bring us up to 6th place still three points behind that coveted fourth place spot.  If we can’t manage to get past Besiktas in the Europa League, then the rest of this analysis is moot.  Similarly if we lose to Southampton, Spurs and City then we can kiss 4th place good-bye as well.   Assume we knock out Besiktas and continue this good run of form in the league and we can look ahead to Phase 2.

We start this phase off with a possible FA Cup quarterfinal match, then the first leg of the Europa League Round of 16.  There are only four league fixtures to consider, but two of them are biggies:  home to Manchester United and away to Arsenal.  It would be great to win both, but let’s be honest that it’s not likely.  Clearly the United game is a must-win, because let’s face it they always are.  Winning at the Emirates is going to be a tall order, but I believe a draw is more realistic.  The other fixtures against Swansea and Newcastle have to result in six points.

Expected results from 7-Mar to 11-Apr

After all is said and one in this stretch and we are still two points shy of fourth place.  Assume we get a fortunate draw in the Europa League and advance to the quarterfinals, we are still miles away from the Cup final in Warsaw.  If these predictions come true, then think about what the club will have accomplished in 2015.  We’d have taken 35 out of possible 39 points in Premiership play over three and a half months, yet still that won’t likely be good enough to get us into fourth place.  That brings us to the homestretch and Phase 3.

Liverpool plays four of their final six BPL matches on the road, including a return trip to Stamford Bridge.  If we are still alive in the Europa League, quarterfinal matches will bookend the match at Hull on April 18, the same day that Manchester United goes to Stamford Bridge to play Chelsea.  The following weekend has Arsenal hosting Chelsea, both teams that will be aspiring to have their own Champions League quarterfinal matches to worry about as well.  Mid-April could end up becoming a pivotal month for Liverpool, mostly due to factors beyond their control.  Because I want to display some positive energy, let’s say that we win all the league matches in this phase and pull out a heroic draw at the Bridge.  Where will that leave us?

Expected results from 18-Apr to 24-May

If this prognostication becomes truth, then Liverpool will have taken 51 out of a possible 57 points to close out the second half of the season and even then we’d likely barely sneak into third place.  Last year’s great run saw us take 48 of 57 points, and that was with the world’s best striker on the team and no other competitions to worry about.  We all knew that the club dug a hole to start the season, this exercise simply illustrates how big that hole really was.

So now what?  Clearly this is not an exact science.  Points will be dropped by all teams fighting for top four.  They always are.  Last weekend we saw Chelsea, Manchester City, Southampton and Spurs all get eliminated in the FA Cup.  That’s one less competition for them to worry about.  Manchester United and Southampton are not playing in Europe.  That’s one less competition for them to worry about.  So does this mean we should go all-in with the Europa League?  There are 32 teams left in that competition from all over the continent.  By no means is Liverpool the favourite to win that competition.  According to recent odds listed on Skybet, AS Roma are the current favorites at 11-to-1.  Liverpool is one of eleven clubs sitting at 20-to-1 or better with the bookmakers.  Success in that competition really depends on the draw.  Can we avoid the dreaded trip to a former Soviet state?  There are some high quality sides in that competition (with the obvious exception being Everton of course), but the Reds can beat every one of them in a two-legged tie.  They can also lose to every one of them as well (again the obvious exception being Everton of course).  If the draw is favorable and Liverpool remain healthy, then who knows how far they can go?  It just may be worth going all-in.  I know that everyone wanted to see Gerrard lift a trophy at Wembley before the end of the season, but I would be extremely satisfied if he got to do it in Warsaw on May 27th instead.

None of this matters unless Liverpool continue this run of form.  And what a run it will end up becoming!!  It all begins this Saturday with a win over West Ham.  Get on down to the pub and cheer on the Reds with your mates.  You won’t want to miss it!  Up the Reds!