Before I begin to write about the topic I had originally earmarked for this week, I want to get one thing off my chest.  I’ve been a sports fan since I can remember, with my earliest memories spanning back into the late 1970’s.  As the Premiership continues to rise in popularity amongst American sports, I always get asked why I support Liverpool.  My reply is simple.  It’s about the bond.  It doesn’t matter if that bond is between player-to-fan, fan-to-fan, or player-to-city.  The bonding that I’ve experienced as a Liverpool fan is like nothing I can compare it to.  It can be best summarized through the lyrics of our anthem “You’ll Never Walk Alone.”  It’s why I love to support this club.  That brings me to the debacle that I witnessed on Thursday against Besiktas.  The team looked disinterested, like they couldn’t be bothered.  It was like a completely different team from what I’ve seen these past few months.  I understand that recent results in the league have put us in great position to finish in a coveted Champions League position next season.  That means nothing to me at the moment.  I understand the need to rest some players and not bring them to Turkey.  I have more issues with what appears to be a complete capitulation from the players that actually made the journey.  I hear people try to justify the loss, pointing out the silver lining.  Bollocks.  I know that Besiktas is a good squad, and their fans were absolutely brilliant.  But Liverpool Football Club is better than what we saw on Thursday.  I could live with the loss if I saw some effort from the boys in red.  I saw very little.  I’m going to give everyone the benefit of the doubt.  We were bound for a poor display soon, and I am hopeful this wakes the team up and gets them motivated to push forward with two objectives firmly in sight:  Top Four and the FA Cup.  I have no problem making sure “you’ll never walk alone,” I only ask that the players try to walk in the first place.  Get it done.  That’s all I have to say about that.

There has been much discussion lately about how the team has transformed its season.  Some people believe that credit belongs to Brendan Rodgers for shifting the formation to a 3-4-3 in December.  Others believe that forced change in personnel have been the catalyst.  I tend to believe the latter, having convinced myself that the inclusion of Emre Can into the starting XI was the most important ingredient.  Surely there had to be a way to prove it to myself statistically.

I know that there are numerous different metrics out there already in use, but I was looking to keep it simple.  As a child I continuously gorged myself into sport statistics and I recall that the National Hockey League listed an individual category called “plus-minus” among its league leaders.  Stated simply the plus-minus is a sports statistic used to measure a player’s impact on the game, represented by difference between their team’s total scoring versus their opponent’s.  There’s no better way to prove one’s worth to a squad then to evaluate this statistic.  If you score more goals versus conceding while on the pitch, then you are doing your part.  I decided to try and apply this principle to the Premiership, specifically Liverpool.  The basic assumption with this statistic is that your individual performance on the pitch is independent from how the team performs.  You may not be able to specifically explain why, but if the club can’t stop scoring when Player A is on the pitch then you should probably figure out a way to keep him on the pitch.  So I started the laborious task of gathering the team data, pouring over match reports from the entire season, and putting them into a spreadsheet.

As a team, Liverpool has compiled a +10 goal difference in all competitions.  The first task was to go through every match and figure out who was on the pitch when goals were scored.  For example, we opened the season with a 2-1 victory over Southampton with our goals being scored in the 23rd and 79th minutes.  Joe Allen was subbed on the pitch for Lucas in the 62nd minute, so they each get credit with one goal scored as applied to plus-minus.  After going through all 43 matches played by Liverpool to date, and you can see how the plus-minus statistic applies to our squad. 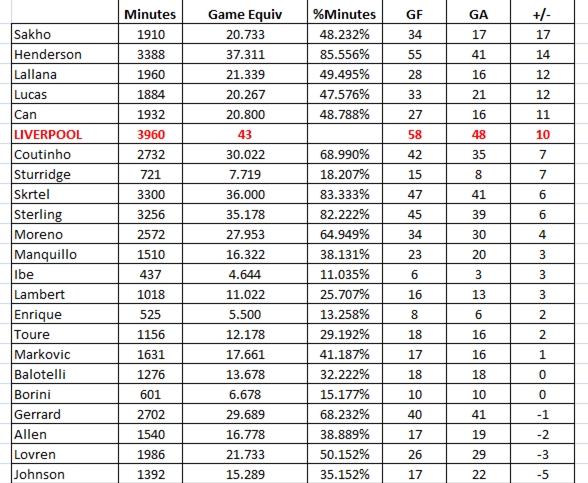 Plus-minus statistics for Liverpool (as of 27-February)

It should be no surprise to see Mamadou Sakho leading the club with an impressive +17 in this category.  In fact, only five players were able to better the plus-minus for the club.  I was admittedly surprised to see Adam Lallana’s name among those five.  This is a good start, but does it tell the entire story?

Immediately I noticed how Daniel Sturridge has the 7th best plus-minus rating despite only playing in the equivalent of 7.719 matches, or 18.2% of the club’s 43 matches to date.  Surely we need to refine this statistic to get a more accurate representation, so I decided to look at the plus-minus on a goals-per-game basis.  In order to do that we need to document how many minutes each player was on the pitch.  This task was relatively simple.  If a player was on for all 90 minutes of a match, he gets credited with one game played.  When Lucas comes off in the 62nd minute against Southampton, he gets credited with 0.689 games played while Joe Allen’s 28 minutes are worth 0.311 games played.  Add them all up and you get a better representation of how many games were played.  From here you simply divide the number of goals scored and against by the equivalent games played to get the plus-minus-per-game. 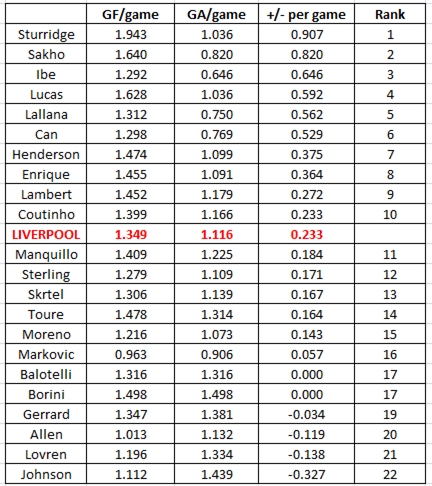 Plus-minus-per-game for Liverpool (as of 27-February)

As expected, this jumped Sturridge straight to the top of the leaderboard, with the club scoring nearly a full goal per game more than the opposition when he’s on the pitch.  Sakho still impressively sits in second while young Jordon Ibe shows up in third place.  The fact that two of the top three players have played a limited schedule for the club (Sturridge and Ibe) has me a little concerned that this could be a statistical aberration.  Perhaps their numbers are skewed because the sample size just isn’t large enough yet.  Perhaps they are merely the beneficiaries of the club’s great form.  Can we honestly link their absence in the fall with the club’s poor results?  Maybe they just lucked into a fortunate schedule where they played inferior opposition when they earned their spot in the starting XI.  For me this last possibility was where I wanted to look next.

This next phase of statistical analysis was a true test for me.  How do you account for the level of competition that each player faces?  The best analogy I can come up with is Olympic diving.  If you are familiar with how that sport is scored, you’ll know degree of difficulty plays a large part.  Just because the judges give two divers the same score doesn’t mean they are tied necessarily.  The diver that attempted the more difficult dive will be scored ahead of the diver that chose the easier route.  I tried to apply a similar model to this statistic.  A player shouldn’t be rewarded just because he was fortunate enough to play 90 minutes against an Aston Villa squad that scores as often as my dead grandmother.  This is where the math gets a little tricky.  I’m more than happy to share my work with anyone that’s interested to see it (just send me an email), but to summarize I looked at each opponent’s expected goals scored and conceded based on their season average.  This would help level the playing field a bit if a player found himself on the pitch against the doormats all the time (like Jose Enrique does).  It took some creative math to equalize the numbers for a team like Ludogorets, who is averaging an impressive 2.21 goals-per-game in the less-than-impressive Bulgarian top division.  Thankfully UEFA does a decent job with their country association coefficients that are publicly available to assist my efforts.  Figuring out how to convert League Two statistics for AFC Wimbledon presented a challenge as well, but I put my mathematics degree to work and figured it out.

This analysis showed me that on average Liverpool opponents have scored 1.32 goals-per-game while they have conceded 1.33 goals-per-game.  Now we need to apply this same concept for the players in order to normalize their numbers.  The easiest way to illustrate this concept is to look at Jordon Ibe.  He debuted as a substitute for six minutes against Aston Villa and then another ten minutes against West Ham.  But the bulk of his playing time was when he worked into the starting XI against Everton, Spurs, Southampton and Besiktas.  Clearly he should be rewarded for playing against decent competition.  Calculated exactly and his opponents conceded an average only 1.182 goals-per-game.  That’s about 12% fewer goals conceded than the collective 1.33 goals-per-game conceded by all 43 Liverpool opponents to date.  Factor that into the equation and Ibe’s 1.292 goals scored/game is the normalized equivalent of 1.453.   Now we can use this formula and apply it uniformly to the entire team. 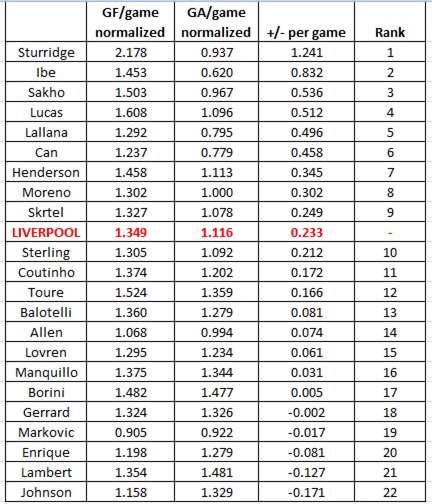 Plus-minus-per-game for Liverpool, normalized (as of 27-February)

What does it all mean?  If nothing else I have used the most basic statistics available to prove to myself that Liverpool Football Club is an exponentially better club when Daniel Sturridge is on the pitch.  Shocker.  I’m sure that over time these numbers will start to regress towards the mean, but it really goes to show you how much we missed his presence throughout the first half of the season.  The second important takeaway was to look at the top eleven players and compare it against our best lineup.  We’ve got Sakho, Can and Skrtel in the back, Ibe, Henderson, Lucas and Moreno in the midfield, and a front three of Lallana, Sturridge and Sterling.  Look familiar?  Coutinho is the only regular starter not listed and he currently ranks 11th.  Lastly I look at some of the individual surprises.  I didn’t expect to see Lallana ranking so high.  At first I thought it was an anomaly of sorts, but he’s actually played in 49.5% of the available minutes.  Has he earned the right to be a regular starter based on this?  Statistically speaking the team is more productive when he’s on the pitch.  Conversely I was surprised to see how poor both Steven Gerrard and Lazar Markovic have been in this metric.  Steven Gerrard has played in 68.2% of the available minutes, yet when he’s on the pitch Liverpool have been outscored 41-40.  It boggles the mind. 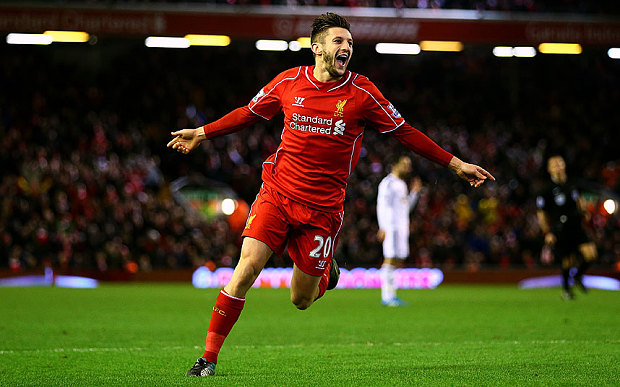 Does Adam Lallana deserve an automatic spot in our best starting XI???  (Photo courtesy of the Telegraph)

In conclusion I want to thank everyone that suffered through the math on this one.  I want to remind everyone that success is earned on the pitch, not on the spreadsheet.  While I am disappointed to have fewer mid-week clashes in our future now that we’ve crashed out of the Europa League, I am excited that the club is in good form and has a legitimate shot to get back to the Champions League.  A win on Sunday against Manchester City would certainly announce our resurgence to anyone that may have been sleeping through our recent form.  Three points on Sunday will go a long way to prove this short absence out of Europe will be the aberration and not the other way around.  So get to the pub to cheer on the Reds.  If you can’t make the Sunday 7 AM kickoff against City, you’ve got another midweek clash with Burnley on Wednesday at 3 PM.