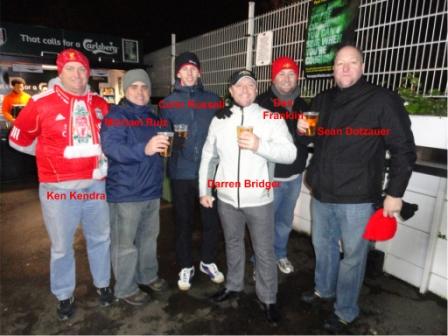 CHAIRPERSON – Ken Kendra – I am a salesperson by day, spending most of my days trying to convince my clients to spend money so that I can earn a nice commission to pay for extravagant excursions to see Liverpool play football.  I played soccer through high school, college, and beyond.   My love for Liverpool goes back to the days when Kenny Dalglish was dominating the league and I had discovered that my favorite band Pink Floyd had added a recording of the Kop chorus singing “You’ll Never Walk Alone” to the end of their song “Fearless.”  If the Reds were good enough for Pink Floyd, they’d be good enough for me.  After seeing the community support following the tragic events at Hillsborough in 1989, I learned the true meaning of “You’ll Never Walk Alone.”  I knew then that this was the club for me.  You won’t always find me at the pub on match day, as I live in rural Chatham County.  If you’re lucky and you play your cards right, you may be able to join myself and other Chatham County Kopites at the private and scenic Scavengers Bar for a match.  I’m all about doing everything possible to make sure that LFC Raleigh is supporting the great fans of our club throughout the Triangle and eastern parts of North Carolina.

SECRETARY – Sean Dotzauer – I am a banker in North Raleigh with a daughter that kicks ass in volleyball for the U.S. Naval Academy.  I love Liverpool, I do.  You can find me on most matchdays at the London Bridge Pub drinking a pint.  Even though I don’t speak a single word of German, it’s true that I supported die Mannschaft in the 2014 World Cup wearing their kit amongst a gaggle of American Outlaws in the final Group Stage match.  I love Liverpool, I do.  Oooooooh, Liverpool I love you.

TREASURER – Dan Franklin – I started following football during the 1998 and 2002 World Cups and quickly appreciated the talents of Michael Owen and Steven Gerrard. I wanted to see them play for more than one month every four years. The Premier League wasn’t televised very much over here but I was able to follow the Reds when they played in the Champions League, including that glorious night in Istanbul. As the coverage improved in the States, my love for Liverpool FC grew and I haven’t missed a game in years. You’ll find me at London Bridge Pub nearly every weekend supporting the Reds.  As your attorney, I suggest you join me.

EVENT COORDINATOR – Colin Russell – I am a personal trainer and a yoga instructor with a Sports/Business Management degree from Ohio State. I now own my own yoga/fitness studio here in the Triangle. My love for LFC comes from my family ties with my grandparents being from Liverpool and Ireland.  Their love for club and country has rubbed off on me, and I have lived for LFC match days for the majority of my life.  I moved to Raleigh from Boston, where I was a member of LFC Boston, and I thought to myself, “why can’t we have that here?” Then I met the rest of these fine lads and the dream has become a reality.  Other then Anfield,  there’s no other place I’d rather be on match day then The London Bridge Pub with this group of supporters.

PUB LIAISON – Darren Bridger – Along with Mike Ruiz, I am part of the ownership group of the London Bridge Pub that was somehow crazy enough to open my doors to you lot so you can watch LFC on match day.  I have loved Liverpool for my entire life, having been born and raised in England.  I left that dreadful country in pursuit of happiness and bar ownership in the United States and have settled here in Raleigh with shared custody of my gorgeous daughter.  I wouldn’t say that I “work” at the pub, but you’ll definitely find me there on match day most likely in front of the television that is furthest away from Colin.